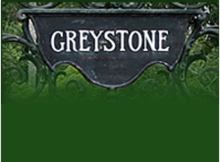 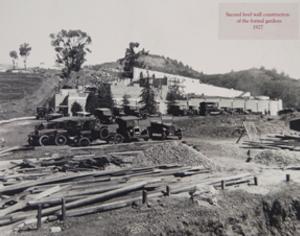 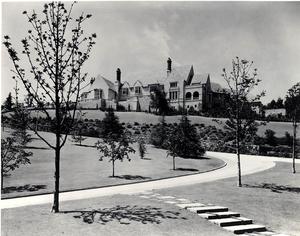 Greystone Mansion was designed by the renowned Southern Californian architect Gordon B. Kaufmann and was constructed by the P.J. Walker Company. The landscape architect was Paul G. Thiene who used a potpourri of Gothic and neoclassic architectural styles.

The structure of Greystone Mansion was built of steel reinforced concrete, faced with Indiana limestone and is roofed of Welsh slate. Upon entering the Mansion, the hand railings and arch-framed stairway typify both the opulence and craftsmanship of the era and of the entire Greystone property. All of the oak banisters, balustrades and rafters were hand carved, while each of the seven chimneys was designed and crafted by a different artist. The floors of the grand hall showcased black and white inlaid marble and an elaborate living room held a balcony where musicians often performed on special occasions. The kitchen featured a pantry built to secure a large adjoining wall safe that was used to store the family’s silver and gold services. The Mansion was built with a servant’s quarters which occupied two floors of the east wing and accommodated a live-in staff of fifteen.

There are fifty-five livable rooms within the 46,054 square feet of living space in the Mansion. While the Mansion’s bedrooms were spread throughout the second floor, the master bedroom suite was located in the west wing and featured an accompanying sitting room, two baths, a dressing room and a massage room. All the rooms with southern exposure offered a panoramic view of the Los Angeles Basin, from downtown to the beaches of Santa Monica Bay. In the north wing where the two oldest boy’s bedrooms were located, a circular staircase led into an adjacent recreation wing that contained a movie theater room, an original Brunswick bowling alley, billiard room and a hidden bar.

Today one may recognize certain scenes from the movies as a number of well known films have been shot here at Greystone using the stately home and its garden-like grounds as a backdrop. The grandeur of the setting also makes it a popular venue for weddings and lavish ceremonies attended by many of Hollywood’s elite. Greystone Estate is located at 501 Doheny Road, Beverly Hills, California 90210.

The original cost to construct Greystone’s entire estate was $3,166,578.12, the Mansion alone cost $1,238,378.76. The extraordinary result became known as Greystone for its abundant use of stone construction and its rather somber gray appearance. In addition to the Mansion, originally located on the grounds were stables and kennels, tennis courts, a fire station, gatehouse, swimming pool and pavilion, a greenhouse, a lake, babbling brooks and cascading waterfalls.

But on the night of February 16, 1929, only five months after the family had moved in, Ned Doheny was found shot to death inside the home, at the age of 35 and the victim of an apparent murder-suicide perpetrated by his longtime personal friend and aid Hugh Plunket.

Lucy continued living at Greystone until 1955, after which she and her second husband Leigh M. Battson sold the majority of the original land to the Paul Trousdale Corporation, developers of Beverly Hills’ prestigious “Trousdale Estate” homes. The following year Lucy and her husband sold for approximately $1.5 million the remaining 18.3 acre parcel, including Greystone Mansion, to Henry Crown of Chicago-based Park Grey Corporation. Mr. Crown, however, never formally occupied the site but instead leased it out as a popular filming location, a legacy Greystone still maintains today.

On September 16, 1971, the entire 18.3 acre site, including its centerpiece Greystone Mansion, was formally dedicated as a public park by the City of Beverly Hills. Five years later, on April 23, 1976, Greystone Estate was officially recognized as a historic landmark and was entered into the National Register of Historic Places.  On January 25, 2013 the Doheny Greystone Mansion was designated Historic Landmark #4 by the City of Beverly Hills and entered into the Local Register of Historic Properties.

Greystone Mansion, and the surrounding grounds it shares its magnificent beauty with, are rich in California history. Edward Laurence Doheny, the original proprietor of the Greystone land, was born in 1856 in the small Midwestern town of Fond du Lac, Wisconsin. By the time he was a young teen, Doheny’s adventuresome spirit and love of the wilderness led him to prospecting for gold and soon thereafter, oil. In 1892, Doheny and his friend Charles A. Canfield, were the first to strike oil in Los Angeles. They later discovered large oil deposits in Mexico which, combined with their Los Angeles holdings, made them the largest producers of oil in the world at that time.

Edward Doheny and his wife Carrie Louella Wilkins had two children. Their first, a daughter Eileen, passed away when she was just seven years old. On November 6, 1893, their only son, Edward “Ned” Laurence Doheny, Jr., was born and grew up as heir to one of the world’s great financial empires. Ned went on to marry Lucy Smith of Pasadena and in 1926 Edward Laurence Doheny Sr. gave his son as a wedding gift a premium parcel of land consisting of 12.58 acres with sweeping citywide views.

Construction of the palatial manor home began February 15, 1927 and although Ned, his wife Lucy, and their five children moved into the residence in September 1928, the estate took three years to complete at a cost of over $3 million, an almost unimaginable sum in real estate at the time. 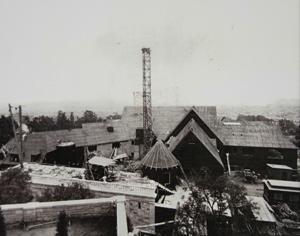